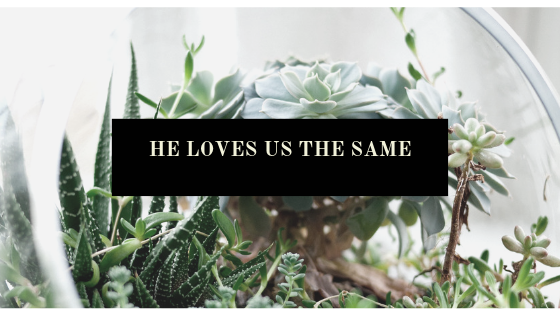 As a young believer, I misunderstood the love of God. Even though I knew scriptures that said that the love of God was not based on my works, it sounded too good to be true. I mean how could He love me in my bad days the same way He does on my good days? Even though I knew that He loved the sinful world enough to die to save us all, I thought I still had to be very good in order to make Him continue to love me. I failed woefully at this task. Each failure lead to further frustration. This Christianity thing was hard I won’t lie. It sounded like a very beautiful idea that was unachievable.

I saw those whose faith walk looked perfect always. ‘They deserved the love not me’ i said to myself. I sometimes wondered though how realistic this kind of walk was. But who was I to judge. The standard was too high. Sustaining God’s love for me seemed like an impossible task.

Sunday came and everyone had to act good and perfect. It looked fake. My little mind could not understand how fast and easy it was to wear the masks. Sundays looked very different from other days even though I was dealing with same people. I didn’t find it interesting. A part of me felt I had to do same to sustain God’s love. Despite being taught enough to know that God didn’t like me presenting a false image to Him, it was easier to act along just so i could fit in.

I often wondered what it would be like if we all took off the masks and showed who we were Monday to Saturday. I wondered if we could maintain same circle of friendships and if the religious titles would remain. Wasn’t this all part of the pursuit of sustaining God’s love?

The more i grew in faith, the more my flawed perception of God’s love began to melt away and i began to learn and understand that there is a difference between God loving me and God being pleased with me. There is nothing i do or will do that can ever make Him love me more or less. He loves the priest the same way He loves the terrorist. Sounds crazy i know. His love doesn’t make sense to our mere human mind because it is beyond our thought process. My actions has no impact on the measure of God’s love for me. My actions on the other hand determines whether He is pleased with me or not.

Knowing that His love for me is secured, i became less concerned about sustaining His love and was more concerned on whether He is pleased with me.

This same measure of constant and steady love is what He has for you too. He sees the filthiness in us. He is the Truth that reveals the darkness in us but still He chooses to love us the same.

He doesn’t need you to clean up before coming to Him because He knows that you can never be clean enough for His standard. Hence He extends the open invitation to you. He wants you to come and enjoy the love He lavishes on everyone. Accept Jesus Christ today as your Lord and Saviour so you can feel His overwhelming love for He loves you the same.

53 thoughts on “He loves us the same”