This post was inspired by some comments I received on a previous post; Christianity and Feminism. When i started knowing God for myself, there were bible verses i would read and i would question the thought process behind the writers. Some scriptures really never went down well with me but i hid behind the mask of ‘if it’s in the bible then it’s OK’. As i began to grow in my christian walk and my purpose, i wanted to find the truth behind these scriptures.

For the purpose of this blog, i will be focusing on women. I don’t hate men and i truly believe in the role God has given them.

From a very young age, i have been passionate about women reaching for greater heights. As some of you may already know, i run an organisation called The Pearls of Purity and one of the major things i do, is teaching young girls never to accept the limitations placed on them by society as a result of their gender. I encourage them to find their purpose and embrace all that God has created and called them to be. A huge part of this is making them look into not just examples in society, but also in scriptures so they know and understand that women before them broke through the same limitations.

Before i started this organisation, i wanted to be sure i knew and understood what i was teaching others. So i had to revisit these passages which people including myself then wasn’t so sure of. And as i searched, i found answers by the help of the Holy Spirit.

I will like to start from the beginning. We know that God created Adam before Eve (Genesis 2:7-23). However, it is important for us to note that woman was not an afterthought of God. From the beginning, God had the intention of creating a man and a woman. He didn’t create Adam and suddenly went ‘oh let’s just create another human to keep him company’. Eve (woman) was always a part of the plan. Genesis 1:27 reveals that when God created humans, He created male and female.

Is the bible contradictory?

I feel sometimes we forget that God didn’t write the bible with pen and paper. He inspired people to write. Everyone have a way of narrating a story. The first 4 books of the New Testament have similar stories but they are told differently. Does that make the stories unreliable? No. God is not an author of confusion. The messages conveyed are all the same even if the delivery methods aren’t.

Moses who is the writer of the book of Genesis isn’t exempted from this.

I think the area people challenge the most are the New Testament since it is after Jesus Christ came. It is generally believed that Jesus Christ came to make us see things from a better perspective. If so, why did Paul say certain things he said in the bible? Was Paul sexist?

Let’s get clarity on the bible verses that seem to cause a bit of a debate as to where Paul stood. 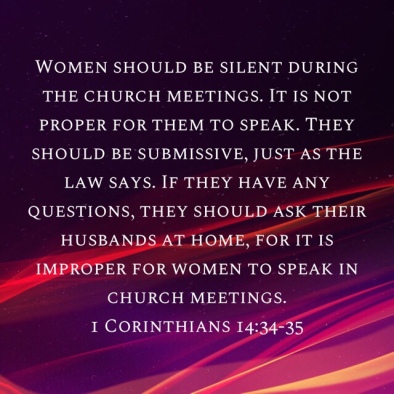 It’s very important for us to understand the context in which a scripture is written. This letter was written to a congregation. Paul was not saying women should not speak in church services today. It is clear from 1 Cor 11:5 that women were prophesying in churches already. In the Corinthian culture then, women were not allowed to confront men in public. Some of the women who had just become Christians thought their new found faith gave them the freedom to challenge men any how they liked. This was causing confusion in the church. Also the women then did not receive formal religious education like the men. So they really didn’t know much and lack of knowledge can make people behave badly.

What Paul is saying here is that women should be modest. I talked about this in my post titled The Power of Nudity | The Spirit of Lust.
Paul also was not forbidding women to teach. This was 1st century Jewish culture, where women were not allowed to study. So their knowledge was very limited. When Paul said they should learn, he was actually giving them a huge and rare opportunity to learn God’s word. I will liken the behaviour of the women here to that of someone who has just come to Christ. Very eager and passionate for God but still have a long way to go in terms of spiritual maturity.

Paul was not anti-women. He did make mention of women who helped out in his ministry. Priscilla taught Apollos in Acts 18:24-26.

The Ephesus church had a challenge with false teachers at the time and just as it is today, women are more prune to fall as prey to these false teachings, hence Paul’s caution.

As a woman, God has given us so much to give. The bible says my people perish for lack of knowledge. Ask God why He created you. Find your purpose and don’t let anyone talk you out of it. We are not men. We are women. God has given every woman a purpose just as He has given men too. Every church should celebrate the uniqueness in us all and give us room to use our gifts.

I hope this post helps in bringing about more clarity.

14 thoughts on “Is the Bible Sexist?”